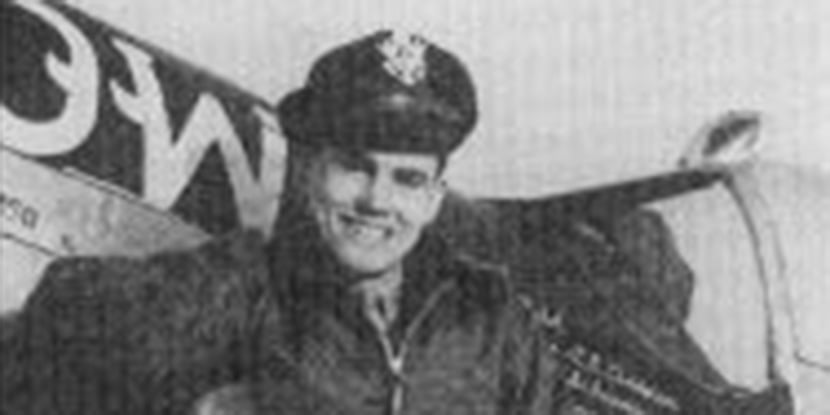 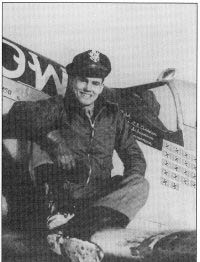 Following commissioning and graduation from the Aviation Cadet program on 29 September 1942, Lieutenant Anderson was subsequently assigned to the 363rd Fighter Squadron, 357th Fighter Group. After training in P-39s, the Group was sent to England in November 1943 and equipped with the new P-51.

Anderson, by then a captain, participated in the 357th’s first combat on 20 February 1943, damaging an Me-109 north of Dessau. He scored his first victory, another ‘109 downed 30 miles northwest of Hanover, on 8 March, and on 11 April was credited with destroying one Me-109, damaging another, and a one-quarter share of a Heinkel 111K west of Hanover. He shot down an Fw-190 30 miles southeast of Orleans, France on 30 April and became an ace on 8 May, downing another ‘190 near Soltau.

Following a brief rest tour in the States, Captain Anderson returned to combat with the 363rd, downing two Fw-190s, and was credited with a third ‘190 as a probable on 27 November. He scored his last a week later, credited with two more Fw-190s and another probable on 5 December.

“Bud” Anderson remained in the Air Force following the War and commanded an F-86 squadron during the Korean War. During the Vietnam War he commanded the 355th Tactical Fighter Wing, logging combat time in the F-105. He retired from the Air Force on 1 March 1972 and subsequently went to work for McDonnell-Douglas Aircraft Corporation as manager of their flight test facility at Edwards AFB, CA.