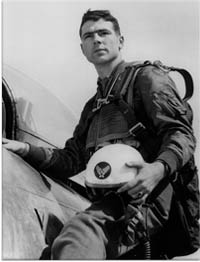 Born in Honolulu, HI, 13 November 1927, Charles Gold (Chick) Cleveland grew up in Woodstock and Albany, NY. He graduated from the United States Military Academy with a BS degree in engineering and a commission as a second lieutenant in the Air Force in June of 1949. Moving directly into flight training upon graduation, he earned his wings on 15 September 1950 at Williams AFB, AZ, and began his flying career in F-84s with the 309th Fighter Escort Squadron at Turner AFB, GA.

Applying for a combat assignment, in Korea he was transferred as a replacement, F-84 pilot, and he was moved to an F-86 unit. Assigned to the 334th Fighter Interceptor Squadron, 4th Fighter Interceptor Wing at Kimpo Air Base, Korea, August and September of 1952 found him in the thick of combat, where he gained credit for four MiG-15s destroyed two probables, and four damaged. His first victory was on 5 August 1952 and his fourth confirmed kill came on 28 September 1952, before he returned to the States.

Remaining in the Air Force, Cleveland held numerous command and staff positions, including a tour as executive assistant to General Westmoreland in Vietnam in 1966/67. He held senior leadership positions including commander, Air University at Maxwell AFB, AL, from which he retired in 1984 as a lieutenant general. His log book reflects 4500 flying hours and 145 combat missions in Korea and Vietnam.